Answer ALL questions. Marks allocated to each question are shown at the end of the question.

(a) A number of developing countries are engaged in exploration of minerals to boost their economic empowerment.

Required:
Advise the Board of Management of the company on the following:

(i) The relevant International Financial Reporting Standard (IFRS) for accounting for exploration of mineral resources and the scope of the standard. (4 marks)
(ii) The key provisions of the IFRS in (a) (i) above on impairments of assets used in exploration activities. (3 marks)
(iii) Disclosure requirements in the financial statements under the IFRS. (3 marks)

In the context of the above statement:

(i) Describe what “fair presentation of financial statements” entails. (5 marks)
(ii) Explain the disclosure requirements where an entity departs from a requirement of the IPSAS. (5 marks)

The acquisition consideration consisted of cash amounting to Sh.3,600 million paid on 1 April 2017. The retained earnings balance of Twende Limited at the date of acquisition stood at Sh.870 million and had no other reserves.

The draft financial statements for the two group companies for the year ended 31 March 2022 were as set out below:

Statement of profit or loss and other comprehensive income for the year ended 31 March 2022: 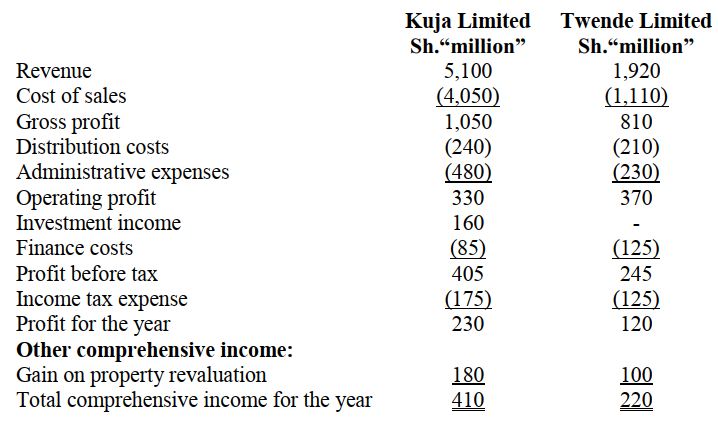 Statement of financial position as at 31 March 2022: 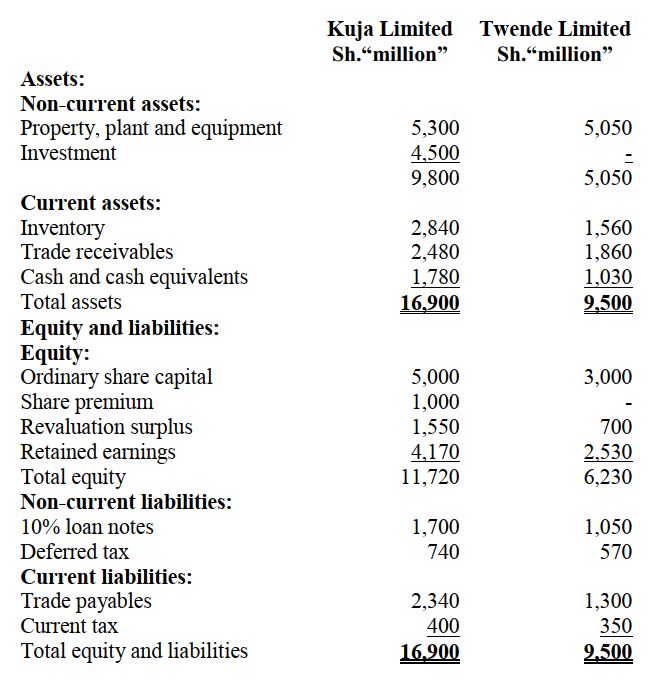 Additional information:
1. A fair value exercise carried out on 1 April 2017 concluded that the carrying amounts of Twende Limited’s net assets approximated their fair values with the exception of an item of plant and equipment which had a carrying amount of Sh.100 million below its fair value. At 1 April 2017, the plant and equipment had a remaining economic useful life of ten years. Depreciation is charged to cost of sales.
2. It is the group’s policy to measure the non-controlling interests at fair value at the date of acquisition. The fair value of the non-controlling interest in Twende Limited on 1 April 2017 was estimated at Sh.1,370 million.
3. Kuja group adopts revaluation model to measure its property, plant and equipment as permitted International Accounting Standard (IAS) 16 “Property, Plant and Equipment”. Revaluation surplus reported Twende Limited relates to the revaluations conducted in the post-acquisition period.
4. During the year ended 31 March 2022, Twende Limited sold goods worth Sh.200 million to Kuja Limited. Twende Limited reports a gross profit markup of 25% on all its sales. Kuja Limited still had 25% of these goods in its inventory as at 31 March 2022.
5. At 31 March 2022, Twende Limited’s records showed a receivable due from Kuja Limited of Sh.140 million which corresponded with the balance in Kuja Limited’s trade payables.
6. An impairment review conducted on 31 March 2022 revealed that goodwill arising on acquisition of Twende Limited was impaired 10%. No impairment loss had been reported in prior years. 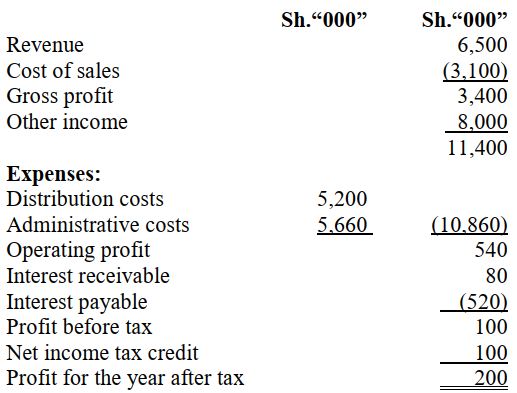 Statement of financial position as at 31 December: 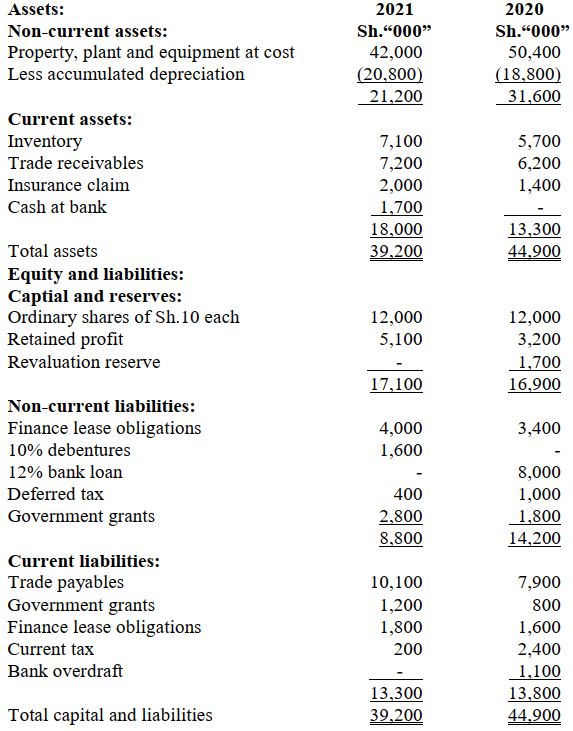 1. Interest expense includes finance lease interest.
2. During the year, Coaster Limited sold its factory at its fair value of Sh.24,000,000. At the date of sale, it had a carrying value of Sh.14,800,000 based on previous revaluation of Sh.17,200,000 less depreciation of Sh.2,400,000 since the revaluation. The profit on the sale of the factory has been included in other income. The surplus on the revaluation surplus related entirely to the factory. No other disposals of non-current assets were made during the year.
3. Plant acquired under finance lease during the year was for Sh.3,000,000. Other purchases during the year qualified for Government grants of Sh.1,900,000. Amortisation of government grants has been credited to the cost of sales.
4. The insurance claim relates to the flood damage to the company’s inventories which occurred in April 2020. The original estimate has been revised during the year after negotiation with the insurance company. The claim is expected to be settled in the near future.

Required:
Statement of cash flows for the year ended 31 December 2021 in conformity with the requirements of International Accounting Standard (IAS) 7 “Statement of Cash Flows”.

(a) On 1 January 2019, Brakewood Limited entered into a contract to lease an item of plant and equipment from a supplier for a three-year period. The terms of the lease were that Brakewood Limited was to pay Sh.500,000 each year with the payments commencing on 31 December 2019.

Initial direct costs incurred on the lease amounted to Sh.30,000 and were paid for Brakewood Limited. The plant and equipment had a remaining economic useful life of five years at the inception of the lease. The lease contract did not contain any purchase option for the lessee.

Brakewood Limited can borrow at a rate of 10% a year.

Required:
Analyse the accounting treatment of the above lease transactions from the inception and for the three-year period of the lease contract. (10 marks)

(b) S and M are advocates operating under the name SM Advocates. The firm’s trial balance for the year ended 30 June 2022 is as shown below: 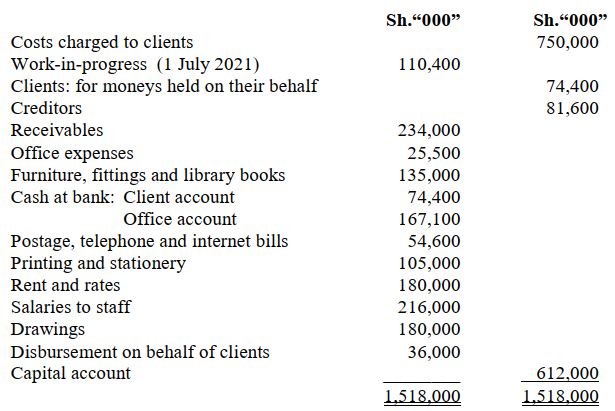 Additional information:
1. It is estimated that debts amounting to Sh.16,500,000 are uncollectable and should be written off.
2. Depreciation should be provided at the rate of 20% per annum on the book value of the furniture, fittings and library books.
3. The uncompleted work on 30 June 2022 was valued at Sh.70,500,000.

(a) Discuss the business concept of “triple bottom line” as applied in financial reporting. (8 marks)

(b) Dragon Limited is a public entity which has grown in recent years acquiring established business entities. The directors of Dragon Limited have identified two potential entities targeted for a takeover. The directors believe that the shareholders of the two target companies would be receptive to a takeover.
As a pre-requisite to the takeover decision, the directors have tasked a firm of consultants to carry out a cross-sectional analysis of the financial statements of the two potential target companies which operate in the same industry sector.
The financial statements of the two entities as at 30 April 2022 are shown below:

Statement of profit or loss for the year ended 30 April 2022: 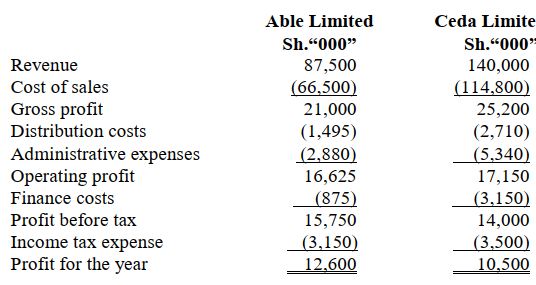 Statement of financial position as at 30 April 2022: 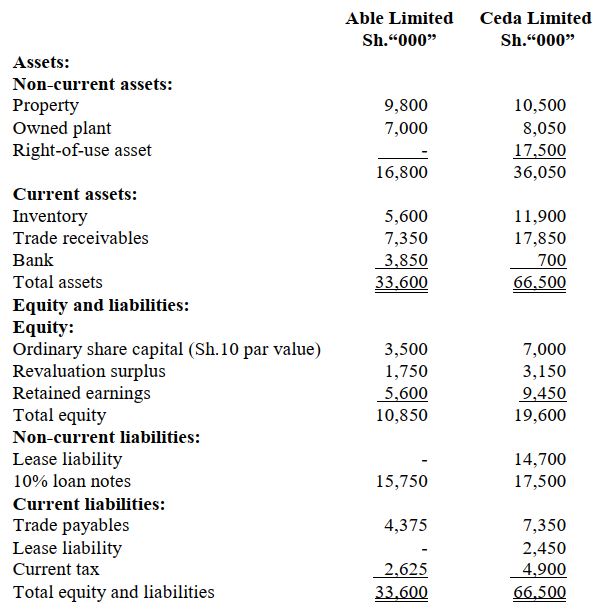