CPA ADVANCED LEVEL
ADVANCED FINANCIAL REPORTING AND ANALYSIS
MONDAY: 1 August 2022. Afternoon paper. Time Allowed: 3 hours.
Answer ALL questions. Marks allocated to each question are shown at the end of the question. Show ALL your workings. 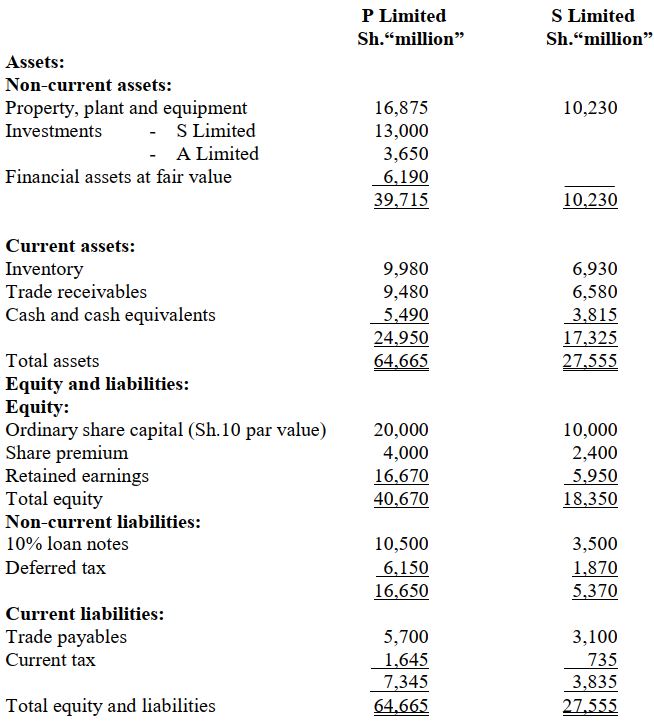 Additional information:
1. On 1 July 2012, P Limited acquired 60% of the ordinary shares of S Limited for a cash consideration of Sh.10,000 million. At acquisition, the fair value of the non-controlling interest in S Limited was Sh.6,500 million. P Limited wishes to use the fair value method of accounting for goodwill. On 1 July 2012, the fair value of the identifiable net assets in S Limited was Sh.14,000 million and the retained earnings of S Limited were Sh.1,200 million. The excess in fair value was due to non-depreciable land.
2. On 1 January 2022, P Limited acquired a further 20% interest in S Limited for a cash consideration of Sh.3,000 million. S Limited reported a profit for the year ended 30 June 2022 of Sh.500 million which accrued evenly throughout the year.
3. During the year ended 30 June 2022, P Limited sold goods worth Sh.2,000 million to S Limited. P Limited reports a gross profit margin of 25% on all its sales. Half of these goods were still in the inventory of S Limited as at 30 June 2022.
4. Goodwill was tested for impairment immediately after the additional acquisition of interest in S Limited and was considered impaired 10%. No impairment had been reported in the previous years.
5. On 1 July 2015, P Limited acquired 30% of 1,000 million ordinary shares of Sh.10 each in A Limited when the retained earnings of A Limited stood at Sh.1,000 million. A Limited had no other reserves as at 1 July 2015. As at 30 June 2022, the retained earnings of A Limited were Sh.3,500 million. No impairment was deemed necessary in respect of the investment in A Limited.
6. None of the group companies declared or paid dividend during the year.
7. None of the group companies issued additional shares.

QUESTION TWO
(a) B Limited operates a factory as its sole cash generating unit (CGU). During the year ended 30 April 2022, there was an explosion in the factory which necessitated an impairment review.
The carrying amounts of the factory assets were as follows:

Additional information:
1. An impairment review revealed a net selling price of Sh.19,200,000 and a value in use of Sh.31,200,000 for the factory.
2. Half of the machinery have been destroyed and have no resale value.
3. The patents have been superseded and are now considered worthless.
4. The company follows the cost model as permitted International Accounting Standards (IAS) 16 “Property, Plant and Equipment”.


Required:
Discuss, with suitable calculations, how any impairment loss in the cash generating unit (CGU) would be accounted for in accordance with the International Accounting Standard (IAS) 36 “Impairment of Assets”. (10 marks)

(b) T Limited, a public limited entity, is a holding company in a group of companies. The following transactions relating to deferred tax were extracted for the purpose of finalising the group financial statements for the year ended 30 April 2022:
1. T Limited owns property, plant and equipment that cost Sh.625 million when purchased. Depreciation of Sh.250 million has been charged up to the reporting date of 30 April 2022. The entity has claimed a total capital allowance on property, plant and equipment of Sh.300 million. On 30 April 2022, the property, plant and equipment was revalued to Sh.575 million.
2. On 31 October 2021, the company completed a development project and incurred a cost of Sh.200 million which it capitalised in accordance with International Accounting Standard (IAS) 38 “Intangible Assets”. The estimated economic useful life of the intangible asset was five (5) years at 31 October 2021. The company obtains full tax relief for research and development expenditure on cash paid basis.
3. During the year to 30 April 2022, T Limited transferred goods worth Sh.1,500 million to one of its subsidiaries. T Limited made a gross profit margin of 20% on its sales. One third (1/3) of the goods remained unsold the subsidiary at the reporting date of 30 April 2022.
4. The trade receivables were carried in the consolidated statement of financial position at Sh.480 million.
This was after an allowance for doubtful debts of Sh.60 million and an unrealised foreign exchange gain of Sh.80 million. The allowance for doubtful debts and foreign exchange gains/losses are only allowed for tax purposes when realised.
5. The balance on the deferred tax liability account of T Group as at 1 May 2021 was Sh.25 million.
6. The income tax rate applicable to T Limited for the year ended 30 April 2022 was 30%.


Required:
In view of the above statement, briefly describe the accounting policy choices that are disallowed under the SMEs Standard. (6 marks)

(c) The International Accounting Standards Board (IASB), has launched a project to improve communication in financial statements, with a particular emphasis on financial performance. Its proposals were outlined in the Exposure Draft “General Presentation and Disclosure”.

(d) The Conceptual Framework for Financial Reporting is a set of theoretical principles and concepts that underlie the preparation and presentation of financial statements.
If no conceptual framework existed, then accounting standards would be produced in a haphazard basis as particular issues and circumstances arose.

Required:
In view of the above statement, discuss the purpose of the Conceptual Framework for Financial Reporting in underpinning the development of accounting standards. (4 marks)

Tanga Limited is a private limited liability company operating in the telecommunications industry. The company has suffered successive trading losses for a number of years, largely due to stiff competition and a sharp decline in revenues.
The directors of the company, who are also the main shareholders, agreed to reconstruct the company transferring it to a new company to be named Elewa Limited.

The statement of financial position of Tanga Limited as at 30 June 2022 was as set out below: 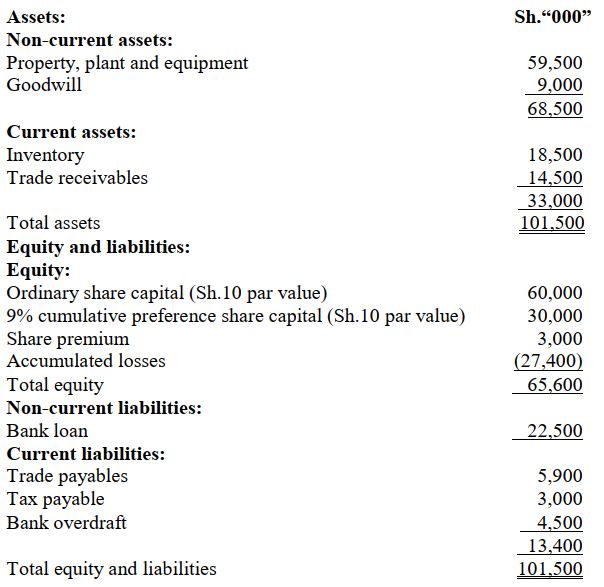 QUESTION FIVE
(a) In the context of IFRS 9 (Financial Instruments), describe the two criteria that must be fulfilled in order for a financial instrument to be classified in the category of “amortised cost”. (4 marks)

(b) W Group has owned a number of subsidiaries for several years. The following information relates to the financial statements of the group: 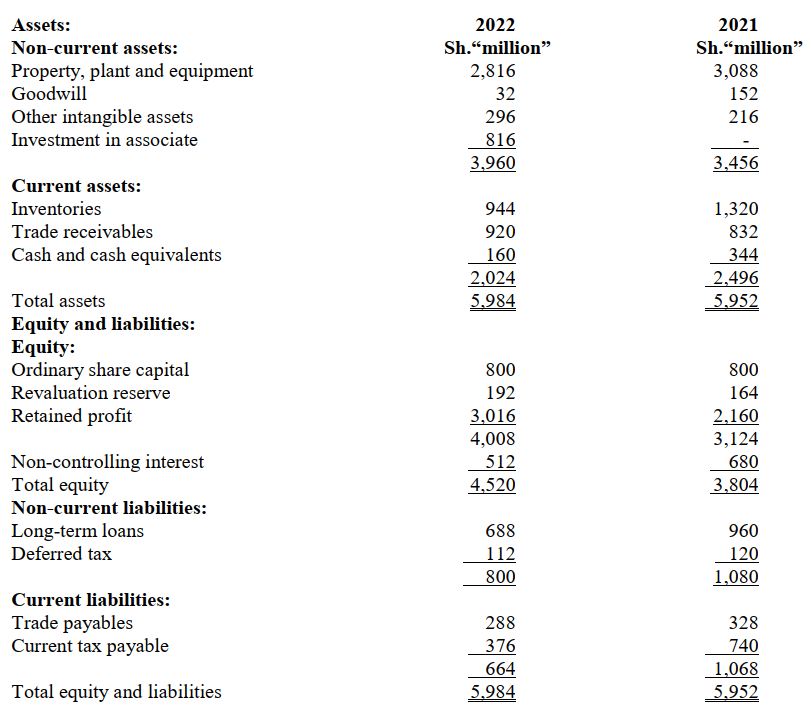 Statement of profit or loss and other comprehensive income for the year ended 31 March 2022: 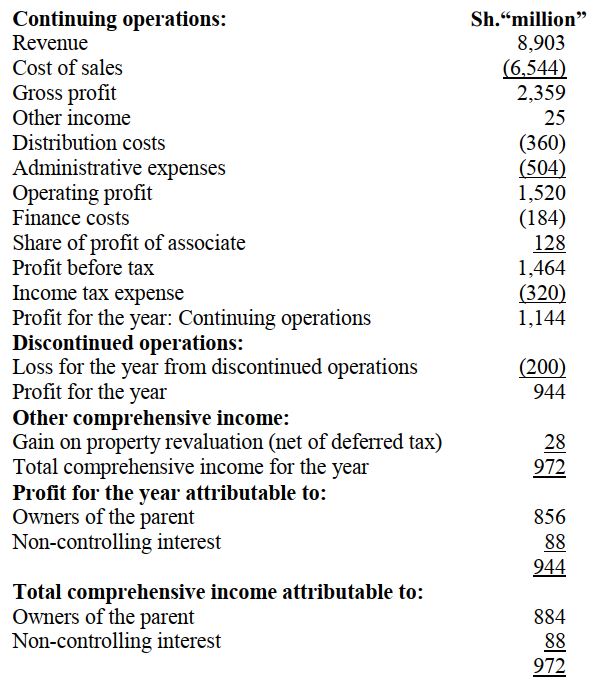 Additional information:
1. During the year ended 31 March 2022, W Group disposed of its entire 80% shareholding in C Limited for cash. The shares had been acquired on 1 October 2017 for a cash consideration of Sh.1,056 million when the fair value of the net assets of C Limited was Sh.980 million. The fair value of the non-controlling interest at acquisition was Sh.224 million.
2. Goodwill calculated under the full fair value method, was tested annually for impairment. At 31 March 2021, goodwill relating to C Limited had been impaired 75%. A goodwill impairment charge has been included within administrative expenses for the current year, but does not relate to C Limited.
3. The carrying values in the individual accounts of C Limited as at the date of disposal are listed below:

4. The loss for the period from discontinued operations in the consolidated statement of profit or loss and other comprehensive income relates to C Limited and is analysed as follows:

5. W Limited purchased a 40% interest in an associate for cash on 1 April 2021. The associate paid a dividend of Sh.80 million in the year ended 31 March 2022.
6. On 1 April 2021, W Limited commenced development expenditure on Product “Que”. The product is expected to be launched in the year 2023. Sh.56 million amortisation on other intangible assets is included within cost of sales.
7. There were no disposals of property, plant and equipment during the year except on the sale of C Limited. Depreciation for the year was Sh.160 million and is included within the cost of sales.
W Limited revalued its property during the year. The applicable corporation tax rate is 30%.
8. Part of the additions to property, plant and equipment during the year were imports made W Limited from a Tanzanian supplier on 31 December 2021 for Tsh.5,400 million. This amount was paid in full on 28 February 2022.
Exchange gains and losses are included in other operating incomes or expenses.
Relevant exchange rates were as follows:
Tsh. to Ksh.1
31 December 2021       Tsh.24 = Ksh.1
28 February 2022        Tsh.27 = Ksh.1

Required:
Consolidated statement of cash flows using the indirect method for the W Group for the year ended 31 March 2022 in accordance with the requirements of International Accounting Standard (IAS) 7 “Statement of Cash Flows”. (16 marks)