Answer ALL questions. Marks allocated to each question are shown at the end of the question. Show ALL your workings.

Peter and John have been trading in partnership for several years sharing profits and losses equally after allowing interest on their capitals at the rate of 8% per annum. On 1 September 2020, the Director of their business, James, was admitted as a partner and was to share one fifth of the profits after interest on capital. Peter and John were to share the balance of the profits equally but guaranteed that James’s share would not fall below Sh.1,200,000 per annum.
James was not required to introduce any capital at the date of admission but agreed to retain Sh.300,000 of his profit share at the end of each financial year to be credited to his capital account until the balance reached Sh.1,500,000. Until that time, no interest was to be allowed on his capital.
Goodwill was agreed at Sh.3,000,000 as at 1 September 2020, but was not to be maintained in the accounts. Land and buildings were professionally valued at Sh.5,680,000 on the same date while the book value of equipment and motor vehicles was to be reduced to Sh.3,000,000 as at that date.
James was previously entitled to a bonus of 5% of the gross profit. This bonus was payable half yearly. The Director’s bonus and the Director’s salary were to cease when he became a partner.
The trial balance below was extracted as at 31 December 2020. No adjustments had yet been made in respect of James’s admission and the amount he introduced as his contribution for goodwill had been posted to his current account. The drawings of all the partners had been charged to their current accounts. 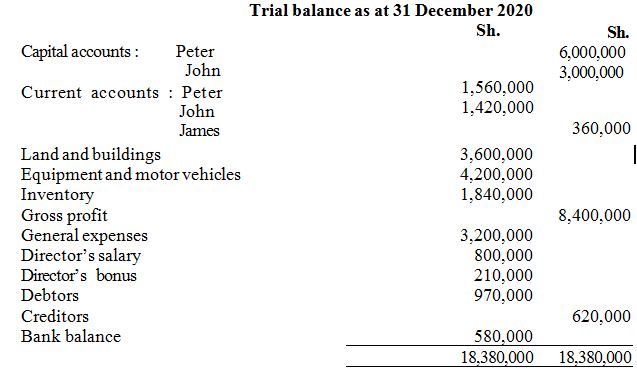 Additional information:
1. It is assumed that gross profit and general expenses accrued evenly throughout the year except that Sh.200,000 of the general expenses relate to a bad debt that arose in the period after James’s admission. The balance of the general expenses accrued evenly.
2. Depreciation is to be charged on equipment and motor vehicles at the rate of 20% per annum on the book value. No depreciation is to be charged on land and buildings.
Required:
(a) Profit or loss and appropriation account for the year ended 31 December 2020. (10 marks)
(b) Partner’s capital accounts as at 31 December 2020. (4 marks)
(c) Partner’s current accounts as at 31 December 2020. (6 marks)
(Total: 20 marks) 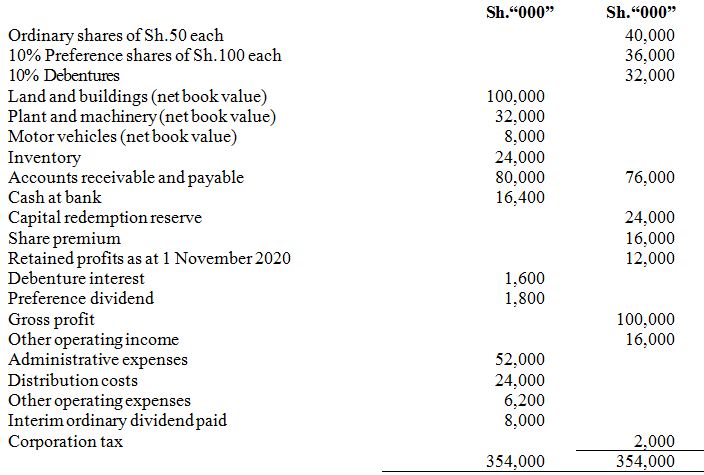 Additional information:
1. A building whose net book value is currently Sh.20 million is to be revalued to Sh.36 million
2. The directors have proposed to pay final ordinary dividend of Sh.8 million.
3. The corporation tax for the current year is estimated at Sh.12 million.
Required:
(i) Income statement for the year ended 31 October 2021. (6 marks)
(ii) Balance sheet as at 31 October 2021. (8 marks)
(Total 20 Marks)

QUESTION FOUR
Wageni Olympic Sports Club is an amateur baseball club which have been in existence for several years. The following draft accounts have been prepared the treasurer of the Club. The treasurer had little accounting knowledge and some figures appearing in the draft accounts were incorrect.
Income and expenditure account (extract) for the year ended 31 December 2020 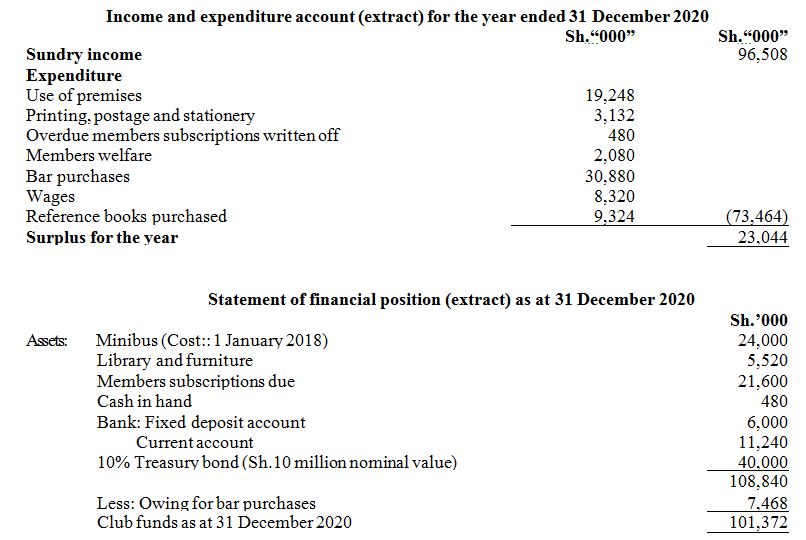 Additional information:
1. The club’s policy on outstanding subscriptions was to write off amounts outstanding for a period exceeding five years. As at 1 January 2020, subscriptions outstanding from members were Sh.12,480,000
2. The club’s premises were purchased on 1 October 2020 for Sh.16 million. This amount was posted to the use of premises account in the draft accounts.
3. The Treasury bond was purchased for Sh.37.2 million on 1 January 2016 utilizing donations earmarked for a member’s welfare fund. Up to 31 December 2019, the income received from this investment had been distributed to members. The income for the year ended 31 December 2020 was included under sundry income as resolved at the annual general meeting held on 10 April 2020.
4. The club runs a bar for the benefit of members. This bar sells stock at a mark-up of 30%. The income from bar sales amounting to Sh.39,708,000 was included under sundry income. There was no opening inventory as at 1 January 2020 and the club owed suppliers Sh.6,500,000 as at 1 January 2020. Bar closing inventory as at 31 December 2020 was not ascertained.
5. The balance of the fixed deposit account as at 1 January 2020 amounted to Sh.6,000,000 reflected in the statement of financial position as at 31 December 2020. No account was taken of interest amounting to Sh.400,000 which had been credited to the fixed deposit during the year.
6. As at 1 January 2020, cash in hand was Sh.400,000 and the bank current account was overdrawn Sh.3,572,000.
7. The reference e-books purchased during the year are to be capitalized as part of the library. Library and furniture are to be revalued to Sh.20,000,000
8. Depreciation is to be provided based on the cost of the assets as follows:
Club premises – 2% per annum Minibus – 20% per annum
Required:
(a) Income and expenditure account for the year ended 31 December 2020. (10 marks)
(b) Statement of financial position as at 31 December 2020. (10 marks)
(Total: 20 marks)

QUESTION FIVE
(a) A bookkeeper extracted a trial balance on 31 December 2020 that failed to agree Sh.330,000, a shortage on the credit side of the trial balance. A suspense account was opened for the difference.
In January 202, the following errors made in 2020 were found:
• Sales daybook had been undercast Sh.100,000.
• Sales of Sh.250,000 to J Church had been debited in error to J Chane account.
• Rent account had been undercast Sh.70,000.
• Discounts received account had been undercast Sh.300,000.
• The sale of a motor vehicle at book value had been credited in error to Sales account for Sh.360,000.
Required:
(i) Show the journal entries necessary to correct the errors. (3 marks)
(ii) Draw up the suspense account after the errors described have been corrected. (5 marks)
(iii) If the net profit had previously been calculated at Sh.7,900,000 for the year ended 31 December 2020, show the calculations of the corrected net profit. (4 marks)
(b) With specific reference to government sector accounting, briefly explain the following concepts:
(i) Budgetary accounting. (4 marks)
(ii) Cash accounting. (4 marks)
(Total: 20 marks)