Answer ALL questions. Marks allocated to each question are shown at the end of the question. Show ALL your workings.

Vista Limited has prepared the following trial balance as at 30 September 2021: 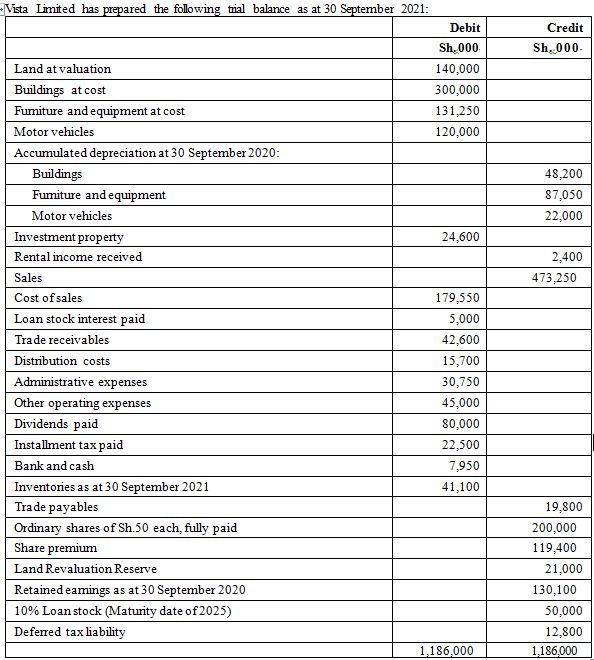 The following additional information is relevant:

3. The investment property is being accounted for using the fair value model as per IAS 40, with the fair value being Sh.25 million as at 30th September 2021.
4. The company has assessed the expected credit loss on trade receivables and has summarized the following details:

The expected credit loss is classified as an administrative expense.
5. Included in other operating expenses is a payment of Sh.10 million made on 30 September 2021. This is the annual lease rental of computer and network equipment, being paid in arrears. The lease is for 5 years beginning this year, although the company is treating the lease as an operating lease. The implicit interest rate is 10%. Any depreciation expense is classified as an administration expense.
6. The company is yet to account for redundancy costs estimated at Sh.25 million. The management made a proposal to the board in August to lay off staff beginning of October 2021. The board is yet to approve, and no announcement has been made yet although the directors feel, the amount should be provided on prudence grounds.
7. After computing the cost of sales, the management was made aware about an error with the inventory module in the accounting software, which understated the opening inventory Sh.10 million and the closing inventory Sh.15 million. The amounts are considered material based on the company’s policies.
8. The par value of the loan stock will be settled on 30 September 2025. The effective interest rate is 10% and the company has classified the loan stock at armotized cost.
9. The corporate tax rate for the year is estimated at Sh.35 million. The taxable temporary differences as at 30 September 2021 are given as follows:
Sh. “000”
For adjustment to Profit or Loss                                       47,000.00
For adjustment in revaluation reserve                            3,000.00
50,000.00
The corporation tax rate is 30%.
Required:
Prepare the following financial statements for publication for the year ended 30 September 2021:
(a) The statement of profit or loss and other comprehensive incomes. (8 marks)
(b) The statement of changes in equity. (6 marks)
(c) The statement of financial position. (6 marks)
(Total: 20 marks)

(a) Explain briefly, how an accounting firm should recognize revenue from providing various accounting services to one client as per IFRS 15 ‘Revenue from Contract with customers’ (5 marks)
(b) Dr. Jacinta Mochari has been working as a resident dentist for the Afya Hospital for the past five years. On 1 January 2020, she began her private practice and leased a clinic in City Hospital Doctors’ Plaza. However, she was to continue as a visiting dentist on request at Afya Hospital.
The following transactions took place during the year:
1. She opened a separate bank account for the practice and deposited Sh.5 million as capital. In addition, she obtained a loan from the bank of Sh.5 million at interest rate of 12% annually. The loan will be paid over 5 years at Sh.1 million, together with interest due at the end of each year.
2. She imported three dental equipment, at a price of Sh.600, 000 each, though she incurred freight, insurance and port clearance costs of Sh.200,000. The equipment is depreciated over five years.
3. She also bought other equipment for Sh.1 million, furniture and fixtures of Sh.2 million and dental books worth Sh.500,000. Both the equipment and furniture were to be depreciated over 8 years, while the dental books have a useful life of 5 years for the purpose of amortization.
4. Dr. Jacinta hired a dental aid, who also doubled as the clinic administrator at Sh.60,000 per month, a receptionist, carrying out other clerical duties at Sh.30,000 per month and a cleaner/casual at Sh.15,000 per month. They all began employment immediately.
5. Dr. Jacinta also hired the services of two other dentists to meet increased number of patients or when she was visiting Afya. During the year, the dentists carried were paid for professional services at a cost of Sh.2 million. In addition, Dr. Jacinta offered some interns learning opportunities and paid them total stipend of Sh.300,000.
6. During the year, patients paid Sh. 6 million in cash, while those on various insurance and medical covers were treated at a total of Sh.4 million. By the end of the year, the corporates and insurance companies had paid Sh.2.8 million directly into the business bank. Dr. Jacinta also noted that a client owing Sh.200,000 will likely not pay.
7. The cash that was received was banked but after paying the following items:
• Surgical and prescription medicine Sh.500,000
• Stationary Sh.40,000
• Cleaning consumables Sh.20,000
• Other office expenses such as telephone, internet and transport Sh.40,000
Cash drawings for personal use Dr. Jacinta averaged Sh.40,000 per month. By the end of the year only Sh.120,000 was available in the office safe.
8. Majority of transactions took place in the bank, except for the one highlighted in note 7. Initially, Dr. Jacinta fixed some amount and earned interest of Sh.120,000. Other expenses were mainly salaries to staff, interest on loan, rent of Sh. 100,000 per month, electricity and water worth Sh.60,000. She also paid Sh.30,000 as subscriptions to the dental association.
9. Dr. Jacinta had paid 3 months deposit on rent, which was refundable upon the termination of the lease. Dr. Jacinta also drew Sh.60,000 every month for personal expenses from the bank. Meanwhile the electricity and water bills for December had not been paid, but were subsequently received and settled in January 2021 at Sh.4,500.
10. Dr. Jacinta bought surgical and prescription medicine worth Sh.1.5 million on credit. By the end of the year, she had already paid Sh.800,000 while surgical and medicine worth Sh.400,000 was available end of the year.
Required:
Prepared for the year ended 31 December 2020
(i) The statement of profit or loss. (9 marks)
(ii) The statement of changes in capital (3 marks)
(iii) The statement of financial position. (8 marks)
(Total: 20 marks)

QUESTION THREE
The following statements of financial position relate to Hop Limited, Skip Limited and Amp Limited as at 30 September 2021. 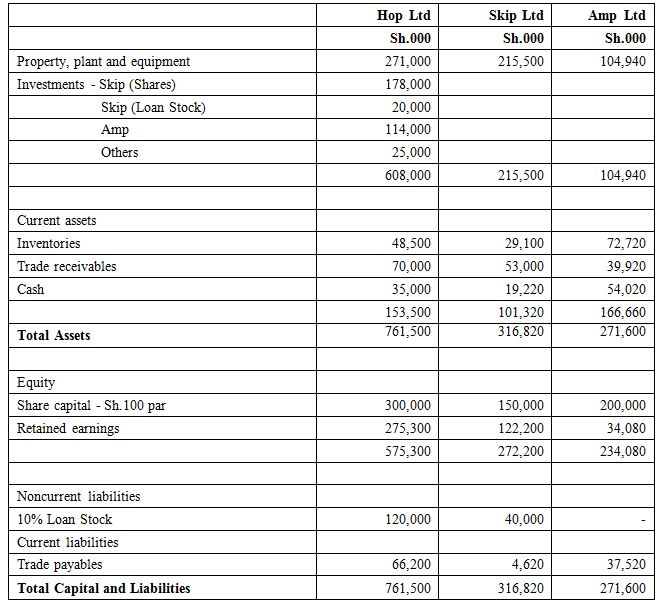 Additional information:
1. Hop Limited acquired 80% of Skip Limited on 1 October 2019 at a cost of Sh.178 million and half of the Loan stock in Skip Limited. At 1 October 2019, Skip Limited had a credit balance on its retained earnings of Sh.18 million. It is the group’s policy to use full goodwill, which can be fairly estimated using the proportions of the parent and the non-controlling interest.
2. During the year ended 30 September 2021 Skip Limited sold goods to Hop Limited for Sh.24 million. On 30
September 2021 half of these goods remained unsold. Skip Limited sells goods at a markup of 25%.
3. On 30th April 2020, Hop Co Limited acquired 25% of Amp Limited at a cost of Sh.114 million. Amp Limited had a retained earnings credit balance of Sh.32 million at this time.
4. The fair values of Skip Limited and Amp Limited were not materially different from their book values at the time of acquisition, with the following exceptions:
(i) Skip Limited held inventories with a fair value which was Sh.4 million greater than book value. All of these inventories had been sold 30 September.
(ii) Items of plant and equipment belonging to Skip Limited had a fair value of Sh.10 million in excess of book value. By 30 September 2021, the items of plant had 50% depreciation applied.

5. An impairment test conducted as at 30 September 2021 indicated that half of the recognized goodwill relating to the investment in Skip Limited was impaired, which only applies at group level. No impairment loss is reported on the investment in Amp Limited.
6. Both Skip Limited and Amp Limited are listed companies. In preparing its statement of financial position, Hop
Limited is yet to reflect the following accounting treatments as required IAS 27 for separate financial statements:

*This is at amortized cost.
Required
Prepare the consolidated and separate (Parent) statement of financial position as at 30th September 2021 (20 Marks).

Elimu Mingi University is a public university based in the coastal parts of the country. The University has summarized the following information for the purpose of preparing the budget information according to IPSAS 24 for the financial year ended 30 June 2021.

The management board of Zico Limited is reviewing the performance of the company for the year ended 30 June 2021 relative to 30 June 2020. The company is engaged in buying and selling various agricultural products and despite challenges in the operating environment due to Covid, the results for 2021 are better than those of 2020.
The company has presented the following financial statements for the two years:

Statement of profit or loss for the years ended 30 June: 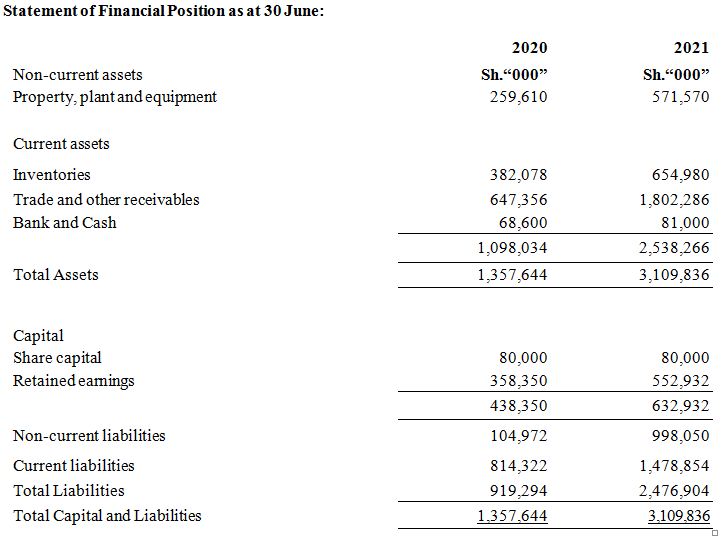