Answer ALL questions. Marks allocated to each question are shown at the end of the question.

You are a manager in XYZ and Co., an international firm of auditors with specific responsibility for the quality of audits. The firm was appointed auditor of Masaku Savings and Credit Cooperative (MSCC) a provider of savings and credit services to its employees located in all parts of the country. You have just visited the audit team at MSCC head office. The audit team comprises of the manager and two audit assistants.
MSCC’s draft accounts for the year ended 31 December 2020 are summarised as follows: 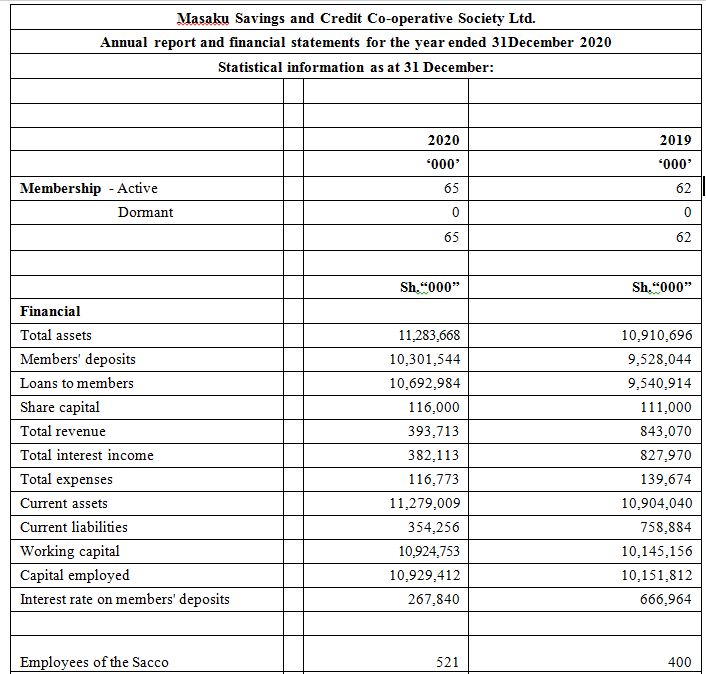 During your visit, a review of the audit working papers revealed the following:
1. One audit trainee is concerned with the ratios presented and has sought the manager’s guidance with regards to the implication.
2. On the audit planning checklist, the audit manager has crossed through the analytical procedures section and written ‘not applicable – new client’. The audit planning checklist has not been signed off as having been reviewed.
3. The audit manager last visited MSCC’s office when the final audit commenced three weeks ago. The audit manager has since completed the audit of total assets. The Audit manager spends most of his time working from the firm’s office and is currently allocated to seven other assignments as well as MSCC’s audit.
4. As at 30 June 2020, trade receivables amounted to Sh.11.3 billion (2019 – Sh.10.2 billion). One of the trainees has just finished sending out first requests for direct confirmation of customers’ balances as at the end of the reporting period.
5. The audit trainee is concerned with the growth in loan to members and the response provided for management is not satisfactory.
Required:
Identify and comment on the implications of these findings for XYZ and Co. quality control policies and procedures.
(Total: 20 marks)

Your firm has recently been appointed the statutory auditor of Mali Mengi Limited, a large soft drinks company in your country, for the year ended 31 December 2021. The previous auditors, from whom your firm has received professional clearance, did not wish to be re-appointed as auditors. The principal activities of the company are the distribution and retail of soft drinks. All products are imported from suppliers based in USA and delivered to Mombasa central warehouse. The company has its own retail outlets but also supplies national supermarket chains and small independent retailers.
Additional information on the company’s operations:
1. Sales
Sales through its own retail outlets are on a cash basis and sales to supermarkets and independent retailers are on a credit basis.
2. Inventory records management
The company maintains computerised inventory records for inventories held at the distribution centre and retail outlets. Each sale is recorded and the computer updates the quantity sold and the inventory balance. The manager at each outlet is responsible for banking the takings on a daily basis.
3. Website Development
During the year, the company engaged consultants to design and implement the company’s new website with online ordering facilities.
4. Targeted launch date
Under the terms of the contract, the website was scheduled to be operational the end of October 2021 in order to take advantage of the high seasonal demand at this time of the year.
5. Failure to launch and legal suit
Due to technical problems, the website was not launched until the end of December 2021. The consultants have been paid in full for their work. However, the company has commenced legal proceedings for breach of contract.
6. Increased revenue in presented management accounts
Despite failing to meet its revenue targets in respect of online revenue, the management accounts for the 12 months to 31 December 2021 indicate an increase in revenue of 30 % compared with the same period in 2020.
7. Stocks and receivables
Stocks and receivables balances are significantly higher than the previous year as a result of the increased level of activity.
8. Proposed expansion
Management is planning to expand the retail activities of the business opening additional retail outlets in Uganda, Tanzania and Ethiopia.

9. Funding of expansion
It is hoping to fund the expansion with a bank loan and has approached the company’s bankers to provide the funding. The bankers require the audited financial statements before making a decision.
Management is keen to have the funding in place to progress with the expansion and would like to have the audit completed 31 December 2021.
Required
Identify, from the circumstances described above, the key business risks and for each risk:
(a) List the factors which have led you to identify that risk. (10 marks)
(b) Outline the audit work you would perform to address the risk. (10 marks)
(Total: 20 marks)

You are responsible for the audit of Mariba and Co. Club and have found some potential causes of concern that could indicate fraudulent activity or financial misconduct within the company.
In particular:
1. 52% of the products on sale Mariba and Co. Club are supplied through one of the major international companies with a special finance arrangement deal.
2. Bank reconciliations were last done 11 months ago.
3. There has been a big turnover of staff heading the finance docket with 5 persons having been replaced over the last 6 months.
4. There are huge unreconciled balances in the accounts receivable and payables running into millions of shillings.
5. The current head of finance has taken sick leave for the last four weeks due to stress.
Required
(a) Comment on the need for ethical guidance for accountants on money laundering. (5 marks)
(b) Explain the difference between fraud and error and how the issues shown here could be categorised as fraud or error. (6 marks)
(c) Discuss the role of management and the role of the auditor in the prevention and detection of fraud and error. (3 marks)
(d) Describe what steps you would take to further investigate and then report on the matters referred to above.
(6 marks)
(Total: 20 marks)

You are the manager in charge of the audit of MNOP Ltd.
The following issues have arisen:
1. A customer is suing the company for Sh.600 million for damage caused to their products in transit. The company is defending the claim and believes that the products were not the responsibility of the company as the goods had been delivered to an independent transporter.
2. A balance due from Mronjiwa Ltd. in respect of sub-contract work, of Sh.300 million, has been outstanding for over six months. Your firm has been asked the accountant not to write to Mronjiwa Ltd. for direct confirmation of this amount as the latter company objects to such letters. You have been assured the accountant that the relationship between the two companies is good and that the outstanding balance will be paid.
Required:
For each of the above issues:
(a) State, with reasons, the audit work that you would expect to find in undertaking your review of the audit working papers for the year ended 31 December 2021. (8 marks)
(b) Draft the relevant sections dealing with these issues of the written representation letter you would wish the directors to sign. (12 marks)
(Total: 20 marks)

As the lead auditor in the audit of XYZ Limited, a company with sole distributorship rights of a new brand of vehicles, the following issues are raised at the closing meeting with management:
1. The company’s working capital has been negative for the last 3 years and financing of company operations has been through an overdraft facility.
2. The financing bank is reluctant to extend further credit to the company due to its’ inability and long delays in servicing the overdraft which has fallen into huge arrears running into Sh.900 million.
3. The supplier of the vehicles is only providing vehicles upon receipt of full payment.
4. Three suppliers have moved to court to have the company put under administration for its’ inability to pay their debt totaling to Sh.800 million.
5. Senior management staff in finance and human resource have recently quit for reasons they were not willing to provide.
6. Salaries to staff are in arrears for over five months and staff are demotivated.
Required:
(a) Draft the audit opinion you would give under the circumstances. (5 marks)
(b) What audit risks are evident from the narration above and what further audit procedures would you perform for each of the issues discussed above. (12 marks)
(c) From the issues identified above, draft a management letter clearly highlighting the issue, implication and recommendation to management. (3 marks)
(Total: 20 marks)